Nina Bankova, Director, IVLP
Nina joined International Institute of Graduate School USA in February 2016 and since has been providing direction and leadership to the International Visitor Leadership Program team. Having spent her career in the professional exchanges field, today Nina manages all grant administration aspects of the IVLP and strengthens relationships with program partners and stakeholders.

Nina has been part of the IVLP network since 2006 when she took over the Professional Exchanges Department of the World Trade Center Institute in Baltimore, MD. Her experience entailed attracting and managing local and international professional exchanges initiatives, academic enhancement programs for local and international universities, and business networking receptions.

Nina holds an M.A. in Applied Economics from Johns Hopkins University and B.A. in Economics from Towson University. When not commuting from Baltimore, Nina likes to spend time with family and friends, preferably outdoors. She liked to travel locally and internationally but mostly visiting her home country of Bulgaria. William (Bill) Bobbitt, Senior Program Officer
Bill Bobbitt has worked at the International Institute as program officer since 2005 and has been involved with the IVLP in various capacities since 1990. Prior to joining the Graduate School USA, Nathan spent his senior year as a student in American University’s School of International Service attending Peking University on a Boren Scholarship In addition to being a program specialist, Nathan concurrently serves as an online Mandarin translator for the government, through the National Language Service Corps.

Nathan holds a B.A. in International Studies from American University. Prior to joining Graduate School USA in June 2015, Tunde worked in media and public relations in different capacities. Tunde worked with Fenton Communications’ digital team in Washington, DC on behalf of clients including Johnson & Johnson and Aga Khan Foundation USA. In New York City, Tunde worked with global communications firm FleishmanHillard’s Reputation Management team on behalf of clients such as the Government of Brazil, where he wrote briefs, created social media metric reports, and analyzed media coverage during the run-up the 2014 FIFA World Cup.

Tunde earned an M.A. in International Media from American University in 2013 and B.A. in Government and Economics from St. Lawrence University. Nic’s IVLP experience started in Philadelphia at Citizen Diplomacy International, where he served as Senior Program Associate and subsequently Interim Program Officer for all IVLP Projects. After this, he spent three years working in international trade with an equipment manufacturer in Italy, during which time he was able to briefly work abroad at the factory in Milan. Nic holds a M.A. in Diplomacy & International Relations from Seton Hall University and a B.A in Spanish from The College of New Jersey.

Outside the office, he can be found on the soccer pitch, in the stands cheering on DC United, or catching live music at any venue between DC, Philadelphia and New York. Gina Cirino, Deputy Director, IVLP
Gina joined the International Institute as a program office in June 2016. She began her international career in high school as a People to People Student Ambassador in Italy, Austria, and Hungary. For four years Ms. Cirino was a Program Officer at the Cleveland Council on World Affairs where she programmed for the International Visitors Leadership Program and fee for service projects with USAID and the Library of Congress.

As a graduate student at Kent State University, Gina was awarded several research and travel awards, which facilitated the completion of her thesis which explored American ethnocentric tendencies that affect worldviews and values. As a Teaching Assistant at Kent, Ms. Cirino inspired students to become globally aware citizens through understanding cultural relativism, ethnocentrism, and how cultural anthropology is relevant to contemporary political issues. In 2012, Ms. Cirino became a certified yoga instructor in Chennai, India; and in 2014 became certified to teach English as a Foreign Language through Global Leadership College.

Gina holds a B.A from American International University in Florence, Italy. She also holds an M.A. from Kent State University in Cultural Anthropology, which focused on analyzing the cultural, social, and political dynamics of diverse geographic areas and the variations within them. Gina has travelled extensively around the world and habitually adds to her list of future destinations. By cultivating new partnerships and collaborating with colleagues, Ms. Cirino strives to be a leader of change in the world. Prior to joining DI, Maren worked as an events coordinator at George Mason University and was an AmeriCorps volunteer in Denver, Colorado serving at a middle school as a tutor and mentor. Her enthusiasm for global affairs was ignited at a young age as she participated in a Spanish foreign language immersion program in elementary school.

She holds a M.A. in Global Affairs specializing in Global Governance and Public Management from George Mason University, and a B.A. in Russian Studies and Business from Georgetown University. Maren is proficient in Spanish and Russian and when she’s not in the office, Maren enjoys hiking Virginia trails, letting loose at Zumba, and listening to podcasts. 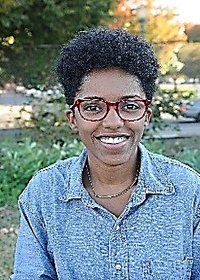 Muriel holds a B.A. in Government from Georgetown University. During her studies, she spent four months abroad at the University’s exchange program in Florence, Italy. When she is not at the office, Muriel likes to explore the DC’s art and cultural scenes, as well as travelling domestically, abroad, and to her native country of Haiti.”